Where do Glasgow’s cyclists cycle and how do we know?

Where do Glasgow’s cyclists cycle and how do we know?

In this guest blog, GoBike member Bob Downie explains how working with data - including Strava Metro app data provided by UBDC - has revealed patterns in cycling activity that can be used to help reduce casualties on our roads.

The roads in Britain can be unfriendly places for the cyclist. For a number of years I have campaigned as a member of GoBike, the Strathclyde Cycle Campaign, to make our highways better places to cycle. When I started campaigning it became apparent that neither the local authorities nor cycle campaign groups had a clear idea of where cyclists in the Greater Glasgow area prefer to ride. This has led to local authorities installing cycle facilities without a model of where cyclists want to travel and cycle campaign groups reacting to local authority initiatives without a clear vision of their ultimate campaign goals.

In order to find a way through this uncertainty, I evaluated several datasets that tell us about where cyclists actually travel, and compared the patterns that these reveal. For this, I have had access to four data sources, which reveal information on preferential cycle routes - the “desire lines”. These data sources are tabulated below.

The cycle tracking smartphone apps link cyclists by GPS and other data location services to servers that track when and where they cycle. Both Strava and ECC then compile these data and make them available, providing mapping and statistical data on cycle usage. Whilst the final web maps seem similar, they are compiled in significantly different ways. Strava assigns all data to modelled road segments so that it can say, for example, “on this section of road on this day there were “x” number of cyclists”. The ECC conversely collects data solely on a point-by-point, time-location basis, with the phone sending out a “ping” at fixed time intervals. This means that the slower a cyclist traverses a route, the more “pings” are collected and the busier the route will appear. Slower off-road routes thus appear conspicuously busier on ECC data than on Strava data. Both tracking apps suffer in that users are self-selecting groups, leaving open the question of whether their cycling behaviour is truly typical of the bigger cycling population. 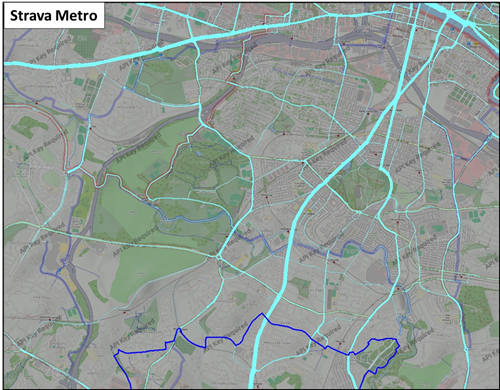 The above figure shows the Strava tracks for a section of Glasgow Southside, though for clarity the least used routes have been filtered out. The width of the blue lines is proportionate to cycle usage and shows the Strava community prefers to travel in straight lines along the main (radial) roads. 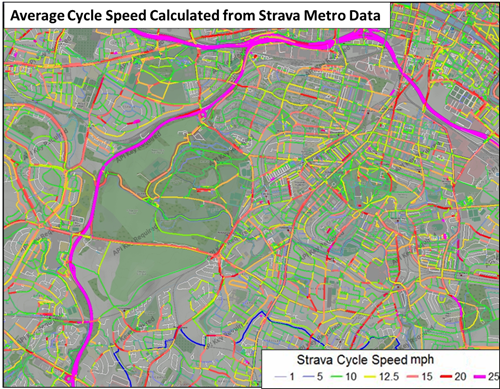 An interesting feature of the Strava Metro data is that it calculates the average time that cyclists take to traverse a road segment. As the lengths of the road segments are known it is possible to calculate the average cycle moving speeds, exclusive of stopping time. Conducting this analysis shows that cyclists travel nearly 50% faster on main (radial) roads than on side streets. It also shows that very few cyclists fail to turn off Strava when they journey by car or bus, as revealed by apparent cycle speeds of >25mph on the motorway network. 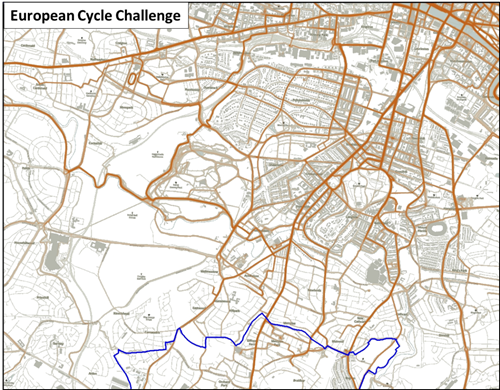 The above figure shows 2017 ECC data for a section of Glasgow Southside. As with the Strava data, the width of the line (red/brown) is proportionate to cycle usage. This shows that cyclists prefer to travel in straight lines along the same main roads that Strava highlights. The ECC data also suggest more usage in off-road areas but this is in part an artefact of the time-based data collection method, as previously indicated. 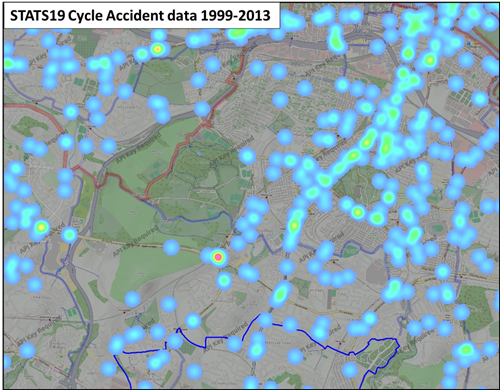 It is an unfortunate fact that cyclists have accidents but the reality is that these are infrequent. Therefore, in order to show spatial patterns, the accident data have to be aggregated over many years. The above image shows a heatmap based on data from a 14-year period. This shows that cycle accidents align along the same main roads that both Strava and ECC data indicate are the preferential “desire lines”. The accident data also highlight that relative to the amount of cycle traffic defined by the app data, certain road features are cycle accident hotspots. These areas include roundabouts on urban dual carriageways and main roads characterised by small shops and on-street parking 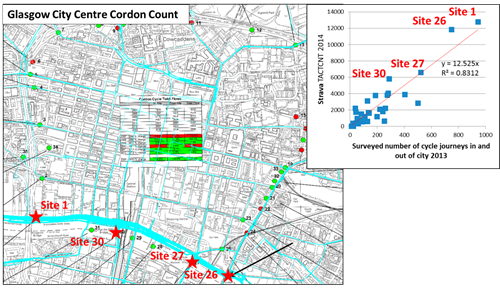 In recent years Glasgow City Council has conducted an annual 2-day survey of cycle activity at entry and exit points to the city centre (see numbered points on the above image). The survey stations can be cross-plotted with the associated numeric Strava Metro data-tracks (light blue lines above). A degree of scattering is shown but overall the correlation is reasonably good. If a route is busy in a roadside survey, it is also busy in Strava. This good positive correlation greatly enhances confidence in that the ability of tracking apps to provide good evidence for the location of the main cycle desire lines.

Both tracking apps suggest that cycle desire lines follow the main radial roads, rather than the quieter back streets. The data in themselves offer no explanation for this preference but logically the main roads offer the simplest and most direct routes from the suburbs to the city centre. The calculation of cycle speed from the Strava data shows that cycles travel faster on the main roads, but whether this is a cause or effect is unclear. The STATS19 accident data and the Cordon Count survey data align well with the smartphone app tracking data enhancing confidence that the apps, despite being used by self-selecting groups, are giving a true picture of cycle activity. The STATS19 accident data show that roundabouts on urban dual carriageways and main streets with shops/on-street parking have cycle accident levels considerably higher than might be expected from the cycle traffic levels shown by the cycling apps. This suggests that these areas should be a focus for action to make them safer for cyclists. 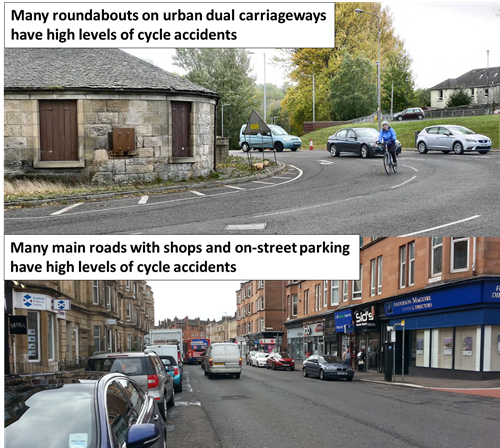 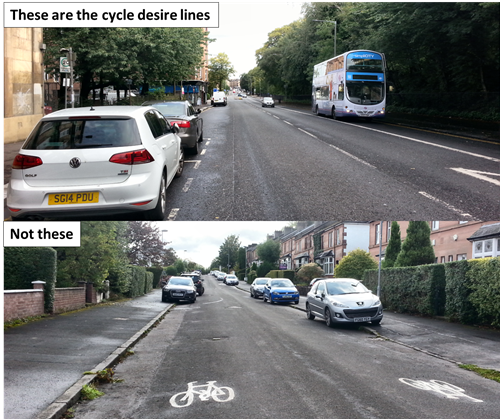 The studies have only been undertaken in the Glasgow area and it would be beneficial to extend similar studies to a much wider geographic area to see if preferential radial/main road cycling patterns are present in all cities. The mapping of cycle accident data has revealed certain road types/features that seem to be associated with abnormally high levels of cycle accidents. Extension of these studies to a wider area might better define which road types and features need to be redesigned to reduce cycle casualties. 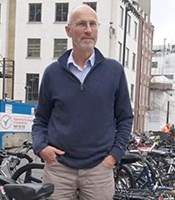 Bob Downie has a fascination with all aspects of cycling as well as a professional background in digital mapping related to his career as a geologist. In recent years he has started to combine his interests in cycling with his interests in digital mapping to investigate cycle traffic in his home city of Glasgow. He has been showing the maps that he has made to anyone that he can get to listen to him. Happily, through his association with GoBike he has managed to get his maps in front of councillors, council officials and some MSP’s, even a government minister. Bob hopes that they will use the information to inform their future decisions on how they integrate cycling into the transport network of a modern nation.